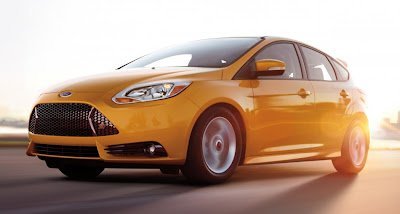 The ongoing launch of the third-generation Ford Focus has brought about a pleasant surprise, the arrival of an additional model, one that’s bound to get the enthusiasts going. As the headline already suggests, it’s the scorching Focus ST model – the car was introduced by Sime Darby Auto ConneXion alongside the 2.0 litre Focus Sport hatch and Titanium sedans a while ago.

Malaysia is the first market in the ASEAN region to launch the ST. The introduction of the barnstormer – only available as a five-door hatch here – is pretty fast, considering that the car’s market debut was announced in June (it made its global debut in Paris two years ago) and deliveries only begin from this month. There’s an estate version of the form, but that’s unlikely to see the light of day here in Malaysia.

Exterior kit is made up of an ST Sport styling kit (body-coloured side skirts, front and rear diffusers), with other elements including a high gloss black front grille and an ST rear spoiler. It sits on 18-inch alloys and specially-developed 235/40 Goodyear Eagle F1 Asymmetric rubbers. 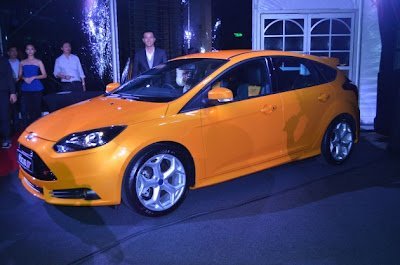 The ST is powered by a 2.0 litre Ti-VCT EcoBoost mill offering 250 PS at 6,500 rpm and 340 Nm at 1,750 rpm, and performance specs include a 0-100 km/h time of 6.5 seconds and a top speed of 248 km/h. It’s paired to a six-speed manual transmission, with specially-revised gearing.
The engine emits a distinctive soundtrack through a newly-enhanced sound symposer, which relays the engine sound directly from the intake into the cabin. The exhaust system, with a unique twin hexagonal centre exhaust tailpipe, has also been tuned to deliver a meaty growl when you gun the car.
A comprehensive range of driver assistance features make their way on – there’s a variable ratio Sport Steering System, which reduces steering sensitivity when driving in a straight line and increases sensitivity when cornering. The EPAS has also been specially calibrated for the car, and detects and counters torque steer using a more aggressively pitched version of Ford’s Torque Steer Compensation (TSC). 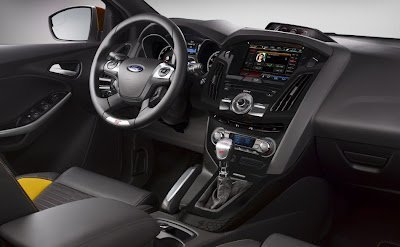 Elsewhere, the ESP features three distinct modes – drivers can turn ESP on for a tuned version of the system found throughout the Focus range. Next, a reduced or wide-slip mode disables traction control and activates ESP only when absolutely necessary. Finally, ESP can be switched off altogether, if you’re into that sort of fun.
Other items include Torque Vectoring Control (TVC), which applies brake torque to the inner wheel through a corner to reduce understeer and Cornering Under Steer Control (CUSC), which applies torque to create yaw torque based on the vehicle’s understeer behaviour prior to ESP, both in power-on and power-off conditions.
The ST gets a unique tuned suspension, of course. The rear suspension has been revised, with a number of new parts developed specially for the car, uprated suspension knuckles and an all-new anti-roll bar design among them. Ride height is lowered by 10 mm over the base Focus, with uprated shocks and springs in tow. 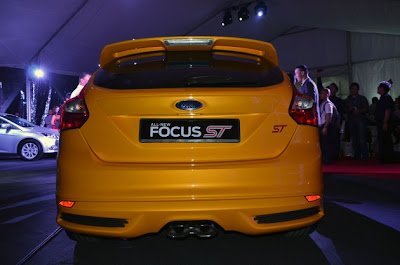 Other kit includes six airbags, capless refuelling system, a sunroof as well as a specially-designed steering wheel, gearshift and pedals. The cabin also features darker headlining and trim on the pillars. Incidentally, the ST here is offered in what is called the ST2 trim level.
For Malaysia, four exterior colours are available, these being Panther Black, Race Red, Spirit Blue and the ST signature colour, Tangerine Scream. The car’s customised Recaro seats has its bolsters decked in matching colours, including that of Tangerine Scream (the Panther Black body colour gets its bolsters dressed in Race Red).
Of note is the pricing of the German-made CBU unit – the Focus ST enters the scene at RM208,888, on-the-road with insurance. The car comes with a three-year/100,000 km warranty as well as Ford’s Extended Service Plan (ESP) maintenance programme, good for three years or 60,000 km. 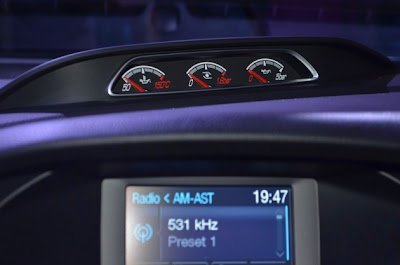 If you want one now, it’ll take about two to three months for the car to get to you; global demand is high, so it’s bound to be an exclusive machine selling in limited numbers here.
From a stick shifter point of view, it’s significantly cheaper than the Renault Megane RS 250, and where it is, more than takes the fight to the base Volkswagen Golf GTI, rivalling the Golf R and Scirocco R for output. Interesting times, indeed. 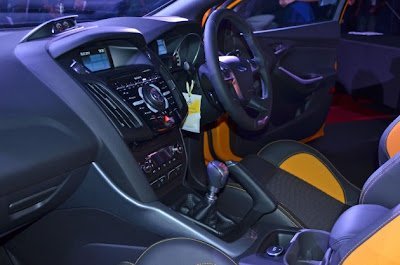 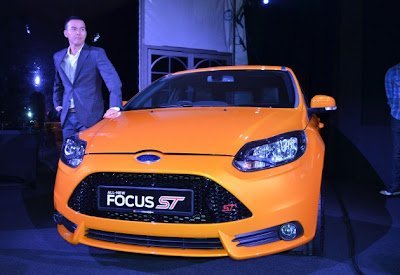