E24, maybe the most beautiful BMW 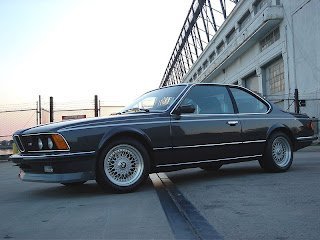 The BMW E24 series was the first BMW 6 Series coupé, produced by the German automaker BMW between the 1976 and 1989 model years. The 6 Series name reappeared with the BMW E63 chassis beginning in the 2004 model year. The E24 borrowed heavily from contemporary 5-series cars (E12, later E28). Model history

The E24 was a replacement for the CS and CSL coupés first produced in 1965. The CS 3.0 was almost changed by adding a few inches in height to make it easier for customers to get into the car. However, Bob Lutz rebelled against the decision and rough drafted an alternative version that soon became the 6 series[2]. Production started in March 1976 with two models: the 630CS and 633CSi. Originally the bodies were manufactured by Karmann, but production was later taken in-house to BMW.

In July 1978 a more powerful variant, the 635CSi, was introduced (for the time being not available in North America and Japan) that featured as standard a special close-ratio 5-speed gearbox and a black rear spoiler.

In 1982 (Europe) and 1983 (US), the E24 changed slightly, with an improved interior and slightly modified exterior. At the same time, the 635CSi received a new engine, a slightly smaller-bored and longer-stroked 3430 cc six to replace the former 3453 cc engine and became available with a wide-ratio 5-speed or an automatic.

E24s produced after June 1987 came with ellipsoid headlamps instead of the halogen lamps of earlier models. The sleeker European bumpers were also discontinued. Previous cars had either a European-standard bumper or a larger, reinforced bumper to meet the US standard requiring bumpers to withstand impact at 5 mph (8 km/h) without damage to safety-related components. 1989 was the last year for the E24 with production stopping in April. The E24 was supplanted by the considerably heavier, more complex, and more exclusive E31.
M Version

From model year 1983, North American and Japanese versions benefitted from the technical revisions and changes to the interior introduced elsewhere in spring or summer 1982. Its chassis was now based on the E28 and no longer on the E12. The front and rear suspension was also revised. Later a self-levelling rear suspension was added to the 635 CSi and M6 features list in 1988.

The US received its own M series E24 in 1987 called the M6. The S38 powerplant found in the US model had several modifications from the M88 powerplant in the European model, most notably: a double row timing chain, modified cam tray, different valve lengths, a slightly different cam profile, less elaborate exhaust manifold (rather than full headers), Bosch X5DC copper spark plugs (instead of Bosch Silver plugs on the M88) and the introduction of an oxygen sensor for the EFI. These changes coupled with the introduction of a catalytic converter for emission regulations reduced the output to 256 hp (191 kW). The US model also included a variety of options not found on the earlier European models, to include: heated power seats, sport tuned self-levelling rear suspension, A/C cooled ice box between the rear seats, A/C vents for rear seat occupants, sunshade for rear occupants and an 8 speaker “premium” sound system. 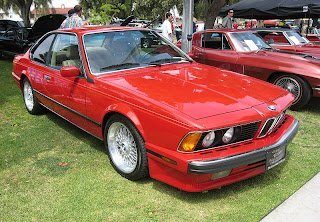