Declaration of the Rights of Man and of the Citizen, 1789 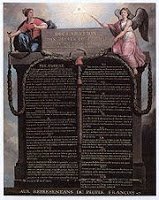 On 17th June 1789 the deputies from the third-estate along with some representatives of the first two estates of the realm – the clergy and the aristocracy – withdrew from the Estates Generaland formed themselves into the National Assembly. Attempts to prevent their continued meeting failed and following the Tennis Court Oath, the remaining deputies joined the Assembly, by order of King Louis XV, on 27th June. These delegates to the newly formed assembly believed they had the mandate to draw up a new constitution for France.

Most deputies considered that they should make a declaration of rights before such a constitution was drawn up, although, other deputies were more reticent, feeling that such a declaration may raise expectations among the populace for change that could not be implemented. Nevertheless, between 9th and 28th July many deputies submitted declarations for consideration, include the hero of the American War of Independence and commander of the Parisian National Guard, the Marquis de Lafayette. When Lafayette made his speech on the 11th July, in which he proposed a declaration of rights which had been drawn up with the advice of Thomas Jefferson, the deputies responded with applause, but decided to send his proposal to be considered buy sub-committees.

The storming of the Bastille prison gave renewed impetus to the proponents of a declaration, while weakening the position of its opponents. Consequently, on the afternoon of the 4th August the Assembly agreed to issue a declaration of rights as a matter of urgency. After a week of debates, hampered by clerical deputies who opposed the right of complete freedom of worship, on 26th August the Assembly finally voted to suspend their deliberations and issue the seventeen articles on which they could all agree, with the proviso that they could amend them later.

The articles made no mention of women’s rights, prompting the playwright Olympe de Gouges to issue a Declaration of the Rights of Women in 1791. Two years later, during a period known as ‘The Terror’, the French government issued an amended declaration to reflect the change in course that the revolution had taken.

This is the text of an English translation of the declaration, the original text is available on the website of the French Ministry of Justice.

Declaration of the Rights of Man and of the Citizen

The representatives of the French people, constituted as a National Assembly, and considering that ignorance, neglect, or contempt of the rights of man are the sole causes of public misfortunes and governmental corruption, have resolved to set forth in a solemn declaration the natural, inalienable and sacred rights of man: so that by being constantly present to all the members of the social body this declaration may always remind them of their rights and duties; so that by being liable at every moment to comparison with the aim of any and all political institutions the acts of the legislative and executive powers may be the more fully respected; and so that by being founded henceforward on simple and incontestable principles the demands of the citizens may always tend toward maintaining the constitution and the general welfare.

In consequence, the National Assembly recognizes and declares, in the presence and under the auspices of the Supreme Being, the following rights of man and the citizen:

1. Men are born and remain free and equal in rights. Social distinctions may be based only on common utility.

2. The purpose of all political association is the preservation of the natural and imprescriptible rights of man. These rights are liberty, property, security, and resistance to oppression.

3. The principle of all sovereignty rests essentially in the nation. No body and no individual may exercise authority which does not emanate expressly from the nation.

4. Liberty consists in the ability to do whatever does not harm another; hence the exercise of the natural rights of each man has no other limits than those which assure to other members of society the enjoyment of the same rights. These limits can only be determined by the law.

5. The law only has the right to prohibit those actions which are injurious to society. No hindrance should be put in the way of anything not prohibited by the law, nor may any one be forced to do what the law does not require.

6. The law is the expression of the general will. All citizens have the right to take part, in person or by their representatives, in its formation. It must be the same for everyone whether it protects or penalizes. All citizens being equal in its eyes are equally admissible to all public dignities, offices, and employments, according to their ability, and with no other distinction than that of their virtues and talents.

7. No man may be indicted, arrested, or detained except in cases determined by the law and according to the forms which it has prescribed. Those who seek, expedite, execute, or cause to be executed arbitrary orders should be punished; but citizens summoned or seized by virtue of the law should obey instantly, and render themselves guilty by resistance.

8. Only strictly and obviously necessary punishments may be established by the law, and no one may be punished except by virtue of a law established and promulgated before the time of the offense, and legally applied.

9. Every man being presumed innocent until judged guilty, if it is deemed indispensable to arrest him, all rigor unnecessary to securing his person should be severely repressed by the law.

10. No one should be disturbed for his opinions, even in religion, provided that their manifestation does not trouble public order as established by law.

11. The free communication of thoughts and opinions is one of the most precious of the rights of man. Every citizen may therefore speak, write, and print freely, if he accepts his own responsibility for any abuse of this liberty in the cases set by the law.

12. The safeguard of the rights of man and the citizen requires public powers. These powers are therefore instituted for the advantage of all, and not for the private benefit of those to whom they are entrusted.

13. For maintenance of public authority and for expenses of administration, common taxation is indispensable. It should be apportioned equally among all the citizens according to their capacity to pay.

14. All citizens have the right, by themselves or through their representatives, to have demonstrated to them the necessity of public taxes, to consent to them freely, to follow the use made of the proceeds, and to determine the means of apportionment, assessment, and collection, and the duration of them.

15. Society has the right to hold accountable every public agent of the administration.

16. Any society in which the guarantee of rights is not assured or the separation of powers not settled has no constitution.

17. Property being an inviolable and sacred right, no one may be deprived of it except when public necessity, certified by law, obviously requires it, and on the condition of a just compensation in advance.
[Source: Hunt, L. (ed.), The French Revolution and Human Rights: A Brief Documentary History (Boston, 1996)]