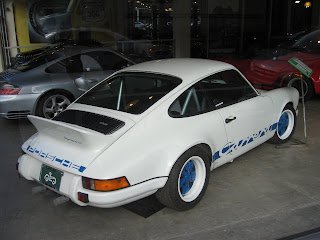 The Porsche Carrera RS 2.7 celebrated its premier at the Paris Salon in October 1972. It was developed to meet Porsche’s need for a competitive motor sport vehicle. For inclusion into group 4, the vehicle had to be one of a run of 500 and, of course, sold, which appeared to be a problem to the Porsche sales experts of the period. Who wanted to buy a car like the Carrera RS which had been rigorously designed to an optimal performance weight?

In fact things turned out very differently. The demand was so great that the planned 500 exemplars had been sold by November 1972 and Porsche had to produce a second run. In the end they made 1580 exemplars, which actually allowed homologation into group 3. Nevertheless, not all models left the factory in the lightweight version, most customers chose the touring package which was fitted out like the 911 S.