Jan 13, 2018
How to Stop Missing Deadlines? Please Follow our Telegram channel https://t.me/PlopAndreiCom ( @plopandreicom)
APPLY FOR THIS OPPORTUNITY! Or, know someone who would be a perfect fit? Let them know! Share / Like / Tag a friend in a post or comment! To complete application process efficiently and successfully, you must read the Application Instructions carefully before/during application process. 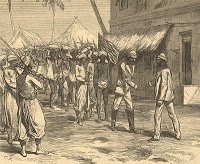 On 8th December 1840 Dr. David Livingston sailed from Britain to embark on missionary work in southern Africa. The month before he left he had received a medical licence from the Faculty of Physicians and Surgeons of Glasgow, and been ordained as a minister of the Congregational Union of England and Wales. In March 1841 he arrived in Cape Town where he stayed for a few weeks before heading north to take Christianity and western medicine to the Africans.

Over the next fifteen years he made several trips of exploration into the interior of the continent returning to Britain in 1856 to find that his accounts of his journeys had given him celebrity status. Over the next two years he wrote a book about his exploits entitled Missionary Travels and Researches in South Africa, and embarked on a speaking tour. In 1858 he became a member of the Royal Society and had an audience with Queen Victoria.

Later that year, he embarked on an expedition up the Zambezi and Shire rivers to assess the prospects for trade in that area. Livingstone’s six and a half years spent in Africa proved expensive and less successful than expected. His team spent less than eighteen months actually exploring the interior as the project was dogged by illness and logistical nightmares. He returned home in 1864 to a much less rapturous welcome than before.

Livingstone set off on another expedition in 1865 to establish a trading outpost on Lake Tanganyika, to continue his missionary work, and to seek the source of the River Nile. His journey through south-west Africa proved difficult and dispiriting. Sickness ravaged his party, who also bore witness to the evidence of the work of slavers. Livingstone often had to take detours to avoid local conflicts and within a year he had lost contact with the outside world.

In October 1868, the publishing editor of the New York Herald, James Gordon Bennett, assigned the task of interviewing Livingstone to the journalist Henry Morton Stanley. Over the next three years Stanley travelled the world hoping to hear news of Livingstone to no avail. Finally, he decided to mount an expedition to find the missionary himself.

In March 1871, Stanley set off with a well-armed party numbering about two-hundred. The journey proved long and arduous with the expedition becoming embroiled in local wars and weakened by the ever-present diseases. Nevertheless, on (a date now thought to be) 10th November 1871, Stanley arrived at Ujiji on the shores of Lake Tanganyika where he doffed his cap and uttered the immortal phrase, ‘Dr. Livingstone, I presume?’ Stanley provided Livingstone’s party with much needed supplies and stayed with them for four months.

The two men developed a close friendship while they explored the region, but Livingstone politely declined the offer of returning with Stanley. In 1872, Stanley returned to Britain to find himself the subject of controversy. Many people doubted his claim that he had found Livingstone. Nevertheless, his book in which he gave account of his expedition, How I Found Livingstone, sold well. Dr. Livingstone died in April 1873 from malaria and internal bleeding caused by dysentery.