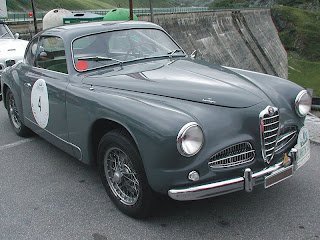 The Alfa Romeo 1900 is a sports sedan designed by Orazio Satta for the Alfa Romeo company in 1950. It was Alfa Romeo’s first car built entirely on a production line and was also Alfa’s first production car without separate chassis and first Alfa offered with left-hand drive. The car was introduced first time for bigger audience in 1950 Paris Motor Show. 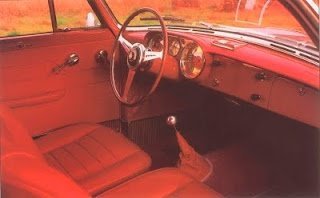 The 1900 was offered in two door or four door models, with a new 1884 cc, 90 bhp, 4 cylinder twin cam engine. It was spacious and simple, yet quick and sporty. The slogan Alfa used when selling it was “The family car that wins races”, not-so-subtly alluding to the car’s success in the Targa Florio, Stella Alpina, and other competitions. In 1951 the short wheelbase 1900C (c for corto (Italian for short) version was introduced. It had a wheelbase of 2,500 mm (98.4 in). In the same year the 1900TI with a more powerful 100 bhp (75 kW; 101 PS) engine was introduced, it had bigger valves, a higher compression ratio and it was equipped with a double carburetor. Two years later the 1900 Super and 1900 TI Super (also 1900 Super Sprint) with 1975 cc engine were introduced. The TI Super had two double carburetors and 115 bhp (86 kW; 117 PS). Transmission was a 4-speed manual on basic versions and 5-speed manual in Super Sprint version, the brakes were drum brakes. The 1900 has independent front suspension (double wishbones, coil springs and hydraulic telescopic shock absorbers) and live rear axle.

The chassis was designed specifically to allow coachbuilders to rebody it, the most notable of which was the Zagato designed, 1900 Super Sprint Coupe, with an improved engine and custom body design. 1900M AR51 or “Matta” is 4wd off-road variant of this car. 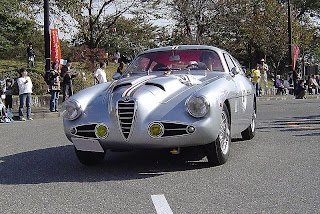