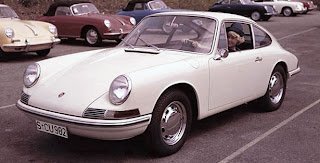 The 911 was premiered at the IAA in Frankfurt in 1963 as the Porsche 901. But a French car company claimed copyright over the use of all model numbers with zero in the middle. Porsche therefore renamed the 901 the 911 – that three figure number which still raises the heartbeat of every sports car fan.

Porsche had been working on the shape of the bodywork for the 911 as early as the fifties, in the days when the 356 was still the marque’s crowd puller. The prototype mutated over time to a four-seater but was not approved by Ferry Porsche. The final shape was the work of Porsche’s son Ferdinand Alexander.

It was decided from the start that the successor to the 356 should also have a rear engine. The choice fell to the six-cylinder Boxer engine with axial fan and – due to the greater speed reserves – an upper camshaft on each side. The camshaft was driven via chains after vertical shafts and toothed belts were disregarded. The 356 frame and chassis were replaced by new designs. The result was a car about which Ferry Porsche later said: ”The 911 stamped the unmistakable character of the Porsche sports car”.
Technical Specifications
Engine: six-cylinder Boxer, air-cooled, one upper camshaft each side
Power: 130 HP (96 kW) at 6,100/min
Displacement: 1991 ccm
Fuel system: two Solex downdraft carburettors,
tank capacity 62 litres
Transmission: five speed gearbox
Chassis: self-supporting bodywork with front independent suspension on transverse links and damper struts, longitudinal torsion bars, rear independent suspension on lateral links and transverse torsion bars
Dimensions and weight: wheel base: 2,211 mm
length: 4,163 mm
width: 1,610 mm
height: 1,320 mm